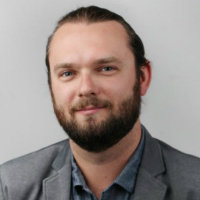 has officially announced Mark Kurlyandchik as its new restaurant critic. Kulyandchik (pronounced ker-lee-AND-chick) was rumored to be taking up Sylvia Rector's torch in early March. His frequent bylines demonstrated a greater focus on photography and video in addition to reporting.

"As the city's arbiter of good taste, Sylvia helped cement the Detroit Free Press as the authority on local cuisine during her two decades as roving critic," he writes. "I hope to continue that legacy, albeit through my own lens, using Detroit's food scene as a window into all the issues it touches: environmental sustainability, social justice, labor rights, economic development and equality."

Kulyandchik previously worked in the editorial department at University of California-Berkley Graduate School of Journalism, and received some training under author and journalist Michael Pollan. The new dining editor seems attuned to the challenges in Detroit's dining scene as well as it's accomplishments is writes that he's prepared to "help separate the wheat from the chaff" in "occasional" reviews.