Certified Cicerone Annette May Wants You To Know Beer

Share All sharing options for: Certified Cicerone Annette May Wants You To Know Beer 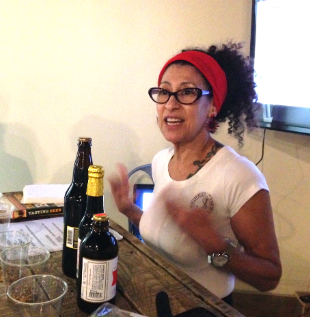 What is a Certified Cicerone? Here's an old-school SAT-style analogy to explain — Certified Cicerone is to beer as Sommelier is to wine. Okay, now that that's cleared up, let's get to the heart of what that means.

Annette May, Certified Cicerone, recently started Know Beer, a company that teaches Southeast Michiganders about beer. Know Beer's classes and "beer camps" cover everything from how to make beer, to how to taste and serve it, to the literally hundreds of styles of beer. Even after 20 years of experience in the beer industry "doing pretty much everything [besides brewing]," May seems to be going non-stop, running Know Beer, tending bar at Slows Bar-B-Q, and adding teaching at Schoolcraft College this fall to her already-packed schedule. Her passion and energy come through in her enthusiastic teaching style. Eater contributor Hannah Lowe attended May's "Basics of Beer" class last week at Brew Detroit and spoke with May about the business of becoming a cicerone and what she's sees happening in the Michigan beer scene.

How did you get into the business of beer?

AM: In 1995, I found myself needing a second career, and while I pondered what that might be, I started bartending (in Chicago). As luck would have it, the second bar I got a job at had a lot of imports and some craft beer. I was never much of a drinker, let alone a beer drinker, back then! One thing led to another, and here I am.

Why did you choose to become a Certified Cicerone?

AM: I had already been working in the craft beer biz for 12 years when the Cicerone Certification Program began. I wanted to test my own knowledge, but I also felt that it might be "expected" of me by industry professionals . . . as I had been involved in educating people about beer for many years.

What is involved in the Certified Cicerone exam?

AM: It is a long, difficult exam. They have a Cicerone boot camp in Chicago that's five 8-hour days. But you also need practical experience. If you work in a bar, a restaurant, or a brewery, you can probably sit the first level, which is 60 multiple choice questions to become a Certified Beer Server. Other levels may take up to two years of self-guided study. [There are currently three levels: Certified Beer Server, Certified Cicerone, Master Cicerone.]

Talk about being in the beer industry in Michigan. How has it changed over the years?

AM: I started working the Michigan beer market from my home base in Chicago a couple of years before I moved here [in 2004], so I have seen a lot of changes in that time. Obviously, the sheer increase in the number of breweries, and the percentage of people that are now drinking craft beer as a percent of total beer. It's still teeny, but has grown. One thing that struck me when I started working this market was the amazing level of camaraderie between breweries and brewers here; it was much more than I had come across in other states.

What Detroit restaurants and bars have excellent beer programs in your opinion?

AM: Mercury Burger Bar, Grand Trunk Pub, and Gold Cash Gold. Slows Bar-B-Q has had all their servers and bartenders take the first level [Certified Beer Server]. Hopefully there will be more restaurants around [that have their servers do that]. Dave [Kwiatkowski] at Sugar House loves good beer, so there's a nice little beer list there too. You're hard pressed to find a restaurant that doesn't offer good beer.

It seems Know Beer has really taken off since inception. How's the business going so far? What's the driving philosophy behind Know Beer? What are you most excited about?

AM: Beer is greatly misunderstood, and it drives me crazy when I hear people tell me that they don't like beer, won't drink beer, hate that microbrew stuff, just want a beer they can drink and not think about, all craft beer is nasty and bitter, etc. I mean, people don't approach food like this, do they? Bottom line is that it's mostly because people have no idea about the flavors in beer. So it's all about educating and exposing people to understanding what they are tasting.

I love to see people's faces when they start to get it, meaning they discover that amber beers are a bit caramelly, or that black beers can taste like chocolate, or that some IPA's taste like grapefruit — all flavors that a lot of people enjoy. Another thing I really want to help people with is how to approach a bar or store that has a ton of choices, and where to start.

The business is going pretty well — there are a lot of people out there that want to learn more. I would love to teach a bigger variety of classes. One class Know Beer teaches is how to brew an actual batch of beer — it's hands-on — on our homebrew system. You spend the whole day at our house actually brewing with my hubby, Mike Bardallis — he's a professional brewer too — and learning the science as you go. It takes about 6 hours and you do all the work. It's called "beer camp."

The other big driving philosophy for Know Beer is helping people attain Cicerone Certification, at both the Beer Server and Certified levels. Because more Certified Beer Servers and Certified Cicerones means better beer enjoyment for all.

Want to learn how to make your own beer or just what the heck goes into those frosty bevs (or that they shouldn't really be served quite so frostily)? Check out Know Beer's website or Facebook page or for the schedule of classes.

Editor markup for The Ultimate Guide to Metro Detroit Breweries. This is only visible in the story editor.
Foursquare