Detroit is home to tons of restaurants, some in plain sight and some hidden gems. To help guide us through the Motor City food world, Eater is enlisting the city's many food luminaries to share with us their recommendations for Dining Confidential.

Whether he's working on the books or helping 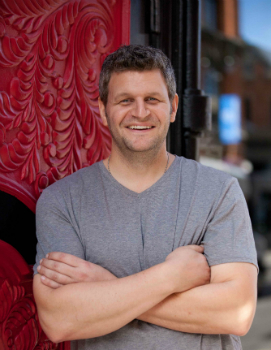 develop a new menu item, frequenters of Greektown's Firebird Tavern will likely recognize co-owner Owen Burke. Prior to opening the tavern, Burke earned his stripes working in bars and restaurants from Detroit to Denver. When he's not at the Firebird, Burke says he's a frequent flyer at spots like the Golden Fleece and Armando's. Ask him about brunch, though, and he gets pretty excited.

Where's your favorite spot for breakfast?

Out in the 'burbs there's the Breakfast Club . . . Everything there is homemade . . . The French toast is this big (gestures). The omelets are this tall (gestures). The guys back there whiskin' ‘em. It's like a real omelet. And the lady that owns the place is always running the host stand and there's always a line out the door on the weekends in the summer time. It's just an awesome place.

They do two different quiches every day. So I do a piece of quiche. They do a breakfast quesadilla. So they put scrambled eggs, sausage, red peppers, green peppers, onions, and they put it in a tortilla. So their breakfast quesadilla is out of this world. The French toast is retarded and then you get a chocolate covered strawberry with your check.

How's would you describe the ambiance?

It's a house. They found a house right on the corner of the street and they retrofitted a commercial kitchen into this house. And when you sit down it's like you're sittin' in your grandma's dining room. It's like the crappy plastic table cover with a piece of glass on it. Everything looks like it's from the 70s. It's terrible, but it's awesome at the same time you know?