Here are the biggest takeaways from Polcyn's grand (not) retirement party. 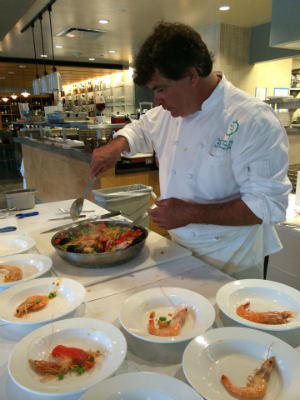 first of two final dinners Wednesday evening at Forest Grill . While it's sad for some fans to see the chef leave the kitchens, the event was a reminder that this isn't the end of Polcyn's career but simply the beginning of a new chapter in his relationship with the industry. The word "retirement" was banned from the event's vocabulary.

As Polcyn didn't shy away from reminding the crowd that he's been doing farm-to-table since before it was trendy. Per the "Greatest Hits" theme, the night's menu touched on dishes from each of Polcyn's five restaurants: Five Lakes Grill, Pike Street, Chimayo, Acadia, and Forest Grill. For diners it was like stepping back in time: think lots of breading and puff pastry.

During his introduction, the chef noted how strange it was to look back at old recipes and discover how overly complex many of them were. As he matured, dishes became simpler and more refined. "I realize as you get older, the simple things are always best, like perfectly cooked carrots," Polcyn said. The tasting kept a brisk pace with diners moving through all six courses in under three hours.

"I realize as you get older, the simple things are always best, like perfectly cooked carrots."

First Course: Firecracker Shrimp with Pineapple Red Pepper Relish was a featured item at Five Lakes Grill. Polcyn credited this restaurant as the start of his focus on defining regional cuisine.

Second Course: Wild Caught Atlantic Salmon in Puff Pastry with Champagne Sauce came with a side of spinach. It was a buttery, delicious dish from Polcyn's Pike Street phase.

Third Course: Pork Belly Confit with Ancho Chile Glaze came topped with barbecue sauce and surrounded by a corn salad that offered a nice bite. This dish hailed from Polcyn's Southwest-inspired Chimayo restaurant and showed some of the chef's charcuterie skills.

Polcyn invited former employee and master sommelier Ron Edwards to curate the wine list, which featured some outstanding pairings. The evening began with a champagne aperitif of Baron-Fuente Grand Reserve Brut, followed by a sweet and acidic Studert-Prum Wehlener Sonnenuhr Riesling Spatlese. The salmon was paired with a Liquid Farm White Hill Chardonnay, while the Chimayo dish was served with a Domaine Huet Vouvray Le Mont Demi-Sec. Vegetables were served beside a Calcinaia Canaiolo Rosato from Tuscany. One bottle of which made it to tables with some oxidation (This mostly lead to curiosity about the difference in color between glasses). Duck was paired with a Grand Tinel Chateauneuf-du-Pape. The evening rounded off with a glass of Cardamaro.

This was a sold-out event and attendees were packed in tight. Polcyn's family, former employees from Five Lakes Grill, and longtime customers were among the crowd. One man mentioned that Polcyn catered his wedding.

At Eater we spend our days documenting the life of a restaurant and this certainly marks the end of an era. More than anything, the evening spoke to Polcyn's ability to surround himself with talent: Newly appointed executive chef Nick Janutol and sommelier Ron Edwards among them. Of course, it's not the end for Polcyn. He's made deals with grocery chains to sell Great Lakes Charcuterie.

Stay tuned for details on what's coming next at Forest Grill.