Ford Field will debut an exclusive new club when the 2015 Lions' season kicks off this fall. The MGM Grand Detroit Tunnel Club will offer fans the chance to see players up close as they enter the field through the tunnel, reports Crain's.

Lions players will enter and exit their locker room through a glassed hallway that runs through the club. Steps from the ramp to the tunnel to the field will be open on one side, allowing tunnel club users to talk to players or high-five them.

The tunnel club also will have a seating area in the tunnel itself, also giving fans access to players.

The club is currently undergoing a 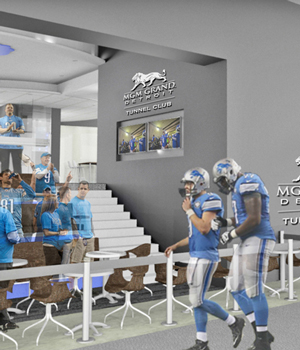 The all-access pass to players comes with a high-ticket price. A cool $19,000 buys two-ticket season packages and includes "two preseason home games, eight regular-season home games and any playoff games at Ford Field." According to a Lions' press release the area will provide unlimited food and non-alcoholic beverages (there will be a cash bar) and early entrance to the stadium. Passes to the club go on sale today.