In this month's edition of Eat Mile, columnist Serena Maria Daniels explores the intersection between new and established businesses with Bumbo's.

In October 2011, Tia Fletcher moved out west to Highland Park, a Los Angeles neighborhood that's like the Latino version of Hamtramck. Traditionally a multiethnic, working-class enclave, it's now experiencing a wave of gentrification as mom-and-pop mercados, elote stands, and panaderias make way for artisanal pizzerias, tattooed baristas, and hipster bars. Working at Johnny's Bar on York Boulevard, Tia could see the neighborhood changing before her eyes.

A few months later, Brian Krawczyk joined Tia in Los Angeles where they married and began thinking about the future. The couple longed for the chance to venture off on their own. However, seeing increasing competition in Highland Park, the Krawczyks couldn't imagine themselves opening a business in Los Angeles. The Michigan natives decided if they were going to pull it off, they would have to come back to their home state, where real estate is cheap and the competition not quite so brutal.

After returning to Detroit, the couple entered the 2014 Hatch Detroit with their concept for Bumbo's, a neighborhood bar and restaurant. Their menu featured kielbasa sliders, sauerkraut pancakes, and koptytka dumplings made with pickled bacon and pumpkin spices, and easily won over the judges. Although Sister Pie ultimately received the grand prize, Bumbo's made it to the semifinals.

Undeterred, the Krawczks set their sights on Hamtramck for their Bumbo's concept. Rather than recruiting a dozen investors to rent a shoebox, they bought their property on Holbrook Street outright, replacing the former Hank's Bar. The bar remained intact and a came with a spacious patio, ample parking, and two apartment units. The Krawczks plan to convert one unit into a commercial kitchen. The other, they'll call home.

The Krawczks say they liked Hamtramck's accessibility, both in terms of affordability and its safe, neighborhood feel — a quality they didn't find as readily in more trendy Detroit neighborhoods like Corktown.

"Hamtramck already has the structure, it's walkable," Tia Krawczyk says. "Other bar owners have been really welcoming here. The owners of Kelly's came in to introduce themselves. They're really sweet. And the owner of Whiskey in the Jar came by and said, ‘if there's anything you need, let me know.' There isn't that sense of competition, it's more like, welcome to the neighborhood." 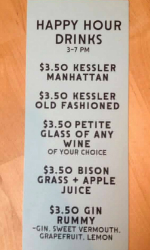 eyes on the property. While they want to hold onto that divey essence, they have been working nonstop to clean it up. They tore out the drop ceiling, exposing a charming tin ceiling. And they've installed an old-school jukebox, filled with their own curated collection.

Right now, Bumbo's does drinks only — cocktails and craft beer. But the couple still has plans to expand into food service. For now they're satiating public interests with occasional pop-ups including one during the recent Hamtramck Music Festival and another at Nancy Whiskey's. Each featured a menu the couple describes as a contemporary take on Polish food. "It's not your grandma's Polish," said Brian Krawczyk, who does the cooking.

So far, Bumbo's is attracting a mix of curious, younger folks enticed by Tia Krawczyk's cocktail list and locals, who'd like to see chicken tenders on the upcoming menu. The Krawczyks are hoping to appeal to both groups, making delicious food and drinks, without pricing anyone out.

Visit Eater Detroit's gallery for a complete tour of Bumbo's.

Correction: Bumbo's made it to the semifinals for Hatch, not the final four.