Share All sharing options for: The Essential Details on Motor City Gas, A Small Batch Distillery in Royal Oak

Located in a former wine tasting room, Royal Oak's Motor City Gas Whiskey has transformed a small, brick building on 4th Street into a fully operational small batch distillery and tasting room. Walking up to the grey painted storefront take a quick glance through the windows and you're likely to spot someone filling clear, pint-sized bottles with amber colored Royal Oaked Rye whiskey. 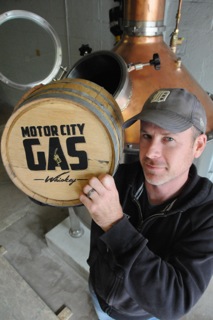 Richard Lockwood, who cofounded the micro distillery with his wife Tonya, says the business developed out of his passion for whiskey. Lockwood worked in marketing at Compuware until he was laid-off three years ago. However, after losing his job, he decided to pursue his hobby. While there are still small projects to be completed (including hanging their sign), Lockwood is excited to see two years of work come to fruition with tomorrow's soft opening of his dedicated whiskey distillery. "We will only do whiskey, but the plan is to get into a variety of different whiskey styles as well as whiskey liquors and infusions," Lockwood says.

The space is split into two areas by sliding barn doors. The east side of the building is devoted to distilling equipment. From making the mash to distilling to bottling, everything takes place right here. Lockwood says he isn't sure how much volume the distillery will produce each year, noting that space is limited at the facility. The rustic tasting room is located on the west side and features wood reclaimed from a 100-year-old west Michigan barn. For now the bar area offers approximately 10 seats, but Lockwood says that number may grow in the future. He plans to eventually offer craft cocktails made with ingredients produced on-site.

Towards the back of the bar one finds Motor City Gas's barrel room filled with large oak casks aging some of the company's future products. The distillery is starting with the release of their rye whiskey, which Lockwood describes as "a subtle rye with a sweeter taste like bourbon." Motor City Gas also has a barrel-aged apple pie moonshine in the works and rum barrel-finished bourbon.

In terms of distribution, the distillery will focus on on-site sales. Still, if things go well, Lockwood hopes to eventually expand and increase production.