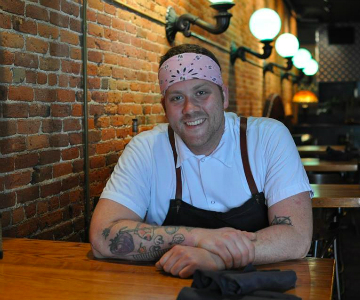 Executive chef Frank Fejeran is stepping down from his position at The Ravens Club in Ann Arbor. Although the restaurant was long known for its stellar cocktails, The Ravens Club's reputation for excellent farm-to-table cuisine has grown under Fejeran's stewardship.

He joined the restaurant's team in April 2013, after a stint as sous chef at Grange Kitchen. He plans to stay on staff in a leadership capacity, working with the restaurant's managing partner Jeff Paquin on producing The Ravens Club's special hot sauce and focusing on a new food truck project.

As his replacement, the two partners have selected Chef de Cuisine Matt Downarowicz to takeover beginning April 1. "This is truly a win/win opportunity for both Frank and Matt and I am extremely excited about our future with Matt at the helm," Paquin tells Eater.

Downarowicz is a graduate of Johnson & Wales University's culinary school and has extensive experience in east coast restaurants. Paquin notes that he's also excited to see the chef put his butchery skills to creative use in the kitchen. "In my mind, Matt is a natural choice as successor to a very solid, growing, and passionate food program at TRC," Paquin adds.

Eater Detroit Is Looking for a New Editor. Is It You?