The irreverent Detroit writer talks about his favorite spots to nosh.

Local writer Aaron Foley has some 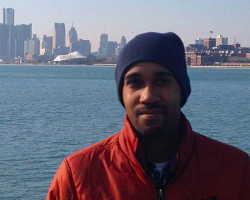 pretty strong feelings about how his hometown of Detroit is portrayed in popular culture. He is part of a tight-knit group of independent journalists who insist on a more nuanced approach to covering the city's much-touted revival. When a Brooklyn-based journalist recently proclaimed that the forthcoming Sister Pie could save the city, he urged young journalists not to fall for the played-out narrative that implies only wealthy, white entrepreneurs are capable of determining Detroit's destiny. He's even working on a book for newbie Detroiters, aptly named How to Live in Detroit Without Being a Jackass, that delves into the city's complicated history.

With all the talk about Detroit's renewal, the city's blossoming restaurant scene invariably becomes part of the dialogue. While Foley is excited to hit up new spots like Gold Cash Gold and Selden Standard, he's quick to point out that Metro Detroit is home to a wealth of culinary diversity. Acknowledging that his own West Side neighborhood near Dexter and Linwood has a long way to go before it becomes a destination for eating, Foley has no hang-ups about venturing outside of the city limits and recommends a number of suburban communities that cater to tastes of all stripes.
"Here in (Metro) Detroit, you don't have to travel that far to try food that is not what you're normally used to," Foley says.

Eat Mile columnist, Serena Maria Daniels, and Foley recently met for lunch and to discuss all things restaurants, food, journalism and, of course, Detroit. He shared some of his favorite places in and around the city.

Head to northwest Detroit, Oak Park, or Southfield for some of the most popular soul food places around, Foley says. While Motor City Soul Food is often referred to as the go-to spot, he's partial to Uptown Bar B.Q. on Livernois near the Lodge Freeway.

Want a nice sit-down Chinese restaurant experience? Oakland County is good for that, symbolic of the migration of the many Chinese American families out of Detroit's derelict, abandoned Chinatown decades ago for safer ground. Foley says when he was a kid his grandmother who lived in Ypsilanti often took a him to a Chinese place in Ann Arbor that served his favorite appetizer: fried shrimp balls. The place has long since shuttered, he says, but Kim's Gardens in Novi serves up a close second.

On top of freelance journalism, Foley also writes for a Dearborn-based ad firm and says he and his workmates often find themselves dining at the many Middle Eastern-owned eateries nearby. His go-to spots include Al Ameer Restaurant and New Yasmeen Bakery. "Everyone from Ford and Team Detroit go there," he says.

While many Detroiters swear by the Americanized, melted-cheese laden platters found at Mexican restaurants on Bagley, Foley suggests taking the extra effort to find one of his favorite Mexican joints, Camino Real Mexican Grill. Situated in a mostly residential area a short distance from the Springwells exit off I-75, Camino Real reminds Foley of the food served at the authentic Mexican taquerias he used to frequent when he had an extended stay in a small border town in south Texas.

Speaking of off-the-beaten path, Foley says he's excited about many of the immigrant-owned restaurants that are popping up in parts of the city that have otherwise been neglected for years. In particular, he has taken a liking to Honduran-owned Antojitos El Catracho. Located on an otherwise grim section of McGraw Street, Foley says the restaurant has, at least in small measure, brought some life to the area. When a restaurant can reinvigorate a community, it has done its part to help Detroit on its road to recovery, he says.