The Young Guns 6 dinner, held at Bacco in Southfield on January 26 featured only two local chefs, bringing in young culinary talent from across the country for a star-studded event. James Rigato of The Root in White Lake enlisted Garrett Lipar of Torino in Ferndale, and Edward Sura of Perennial Virant in Chicago for the dinner, in addition to three chefs from Bravo's Top Chef Season 12. 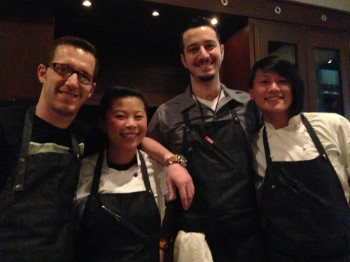 The dinner in Southfield was sold-out, with 175 guests taking up every available table. Top Chef contestants Mei Lin (ink, Los Angeles), Melissa King (private chef, San Francisco), and Adam Harvey (professional chef, New York) all have done well on the show, with Lin and King both making it to the 3-part finale, shot in Mexico. Lipar has recently been in the national spotlight as his restaurant, Torino, was named to the National Eater 38, the first list of essential restaurants throughout the country. Sura has roots in Traverse City, but is currently living and working in Chicago at the well-regarded restaurant Perennial Virant. As for beverages, Joe Robb and Travis Fourmont of Bailout Productions provided the aperitif and digestif to bookend the meal, while Rachel Van Til of Trattoria Stella in Traverse City and Evan Barrett of Plum Market chose wine pairings for each course.

Expectations were extremely high, but guests seemed overall very pleased with the quality of the meal, as individual dishes showed off technical skill, creative plating, and innovative use of ingredients. Midway through the meal Rigato brought Lin, King, and Harvey out of the kitchen to mingle with the diners, which gave the dinner Rigato's signature laid-back and intimate vibe. Catch chef Mei Lin in part two of the Top Chef finale on Wednesday, February 4 on Bravo.