by Brenna Houck Nov 17, 2015, 10:00am EST
Via Aaron Foley's Guide to Detroit Dining [ED], All Coverage of Aaron Foley [ED], How to Live in Detroit Without Being a Jackass [Pre-Order], and Aaron Foley Website [Official]

Share All sharing options for: Preview 'How to Live in Detroit Without Being a Jackass' by Aaron Foley

Here is an exclusive excerpt from Detroit writer Aaron Foley's hotly anticipated new book How to Live in Detroit Without Being a Jackass. Foley is known for his wry critiques of media coverage of Detroit and his book continues in this vein. How to Live in Detroit acts as a sort of insider's guide to the city from a person who knows it and is genuinely intrigued by the changes within. "No one can ever be an expert on Detroit. The city is just too large for anyone to do a comprehensive analysis of life in this city," Foley writes in the introduction. "...It is impossible to capture the Detroit experience in one place."

Within its 279 pages, the author leaves few subjects untouched, from Detroit media to home renovation to dining (even the cover is a tribute to classic Vernor's ginger soda). The chapter below is devoted entirely to Detroit food and drink including how to fairly post on Yelp and a flavor-by-flavor breakdown of Faygo. Read on and pre-order here.

How to Eat in Detroit Without Being a Jackass 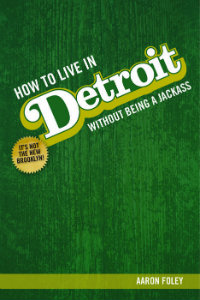 They say Detroit is undergoing a restaurant boom, which is true. New places crop up on a near-weekly basis, breaking our pockets as we figure out which new dish is best. Where things get lost among newcomers is that Detroit didn't have fine dining — or any dining — at all prior to these spots opening up. Let's get one thing straight: Before these new restaurants came, you could always eat well here.

We're also living in a time where a restaurant's reputation can be broken with a few negative reviews online. Most chefs mean well, and the restaurant staffers will be bending over backward to keep your business. Here are a few tips for how not to be a jackass in restaurants:

1. Never go to a restaurant during its opening week. Wait at least a month before visiting. The order of patrons goes like this in opening week: Die-hard foodies during the soft opening; young, suburban crowds in the first few days; curious seniors in the next few days, and everyone else after. You'll want to be part of "everyone else" when the staff knows how to handle large crowds.

2. Speaking of large crowds, don't expect speedy service. Many of Detroit's new restaurants specialize in intricate cuisine, meaning food prepared fresh for each and every dish. Cooks and servers never have the menu down pat in the first few days of opening, and when they finally do, you're still not going to get an Applebee's experience, since places like Applebee's basically serve reheated frozen food. Patience is key.

3. Beware of peak dining hours, and especially beware of game days. Three major sports teams play downtown, which means many downtown restaurants are crowded before and after. Restaurants near concert venues are also packed whenever a big act is in town.

4. Before you write that awful Yelp review, give the place a second chance. I like to give places a second or third time to get it right, because you never know what might happen. The server is having a bad day, the cook ran out of a certain item. Things happen that are beyond the staff's control. Now of course if service or food quality is consistently bad, Yelp away.

"Remember, nothing is hidden — you just didn't know about it."

5. Tip well. This should go without saying, but many restaurants make it a goal to hire within the city. Tipping well goes toward the wages of your fellow Detroit residents trying to contend with things like high car insurance, property taxes, rising rents, childcare costs, and other expensive necessities.

6. Tell a friend. Not everyone reads Eater or Hour Detroit; there are places new and old, big and small, that largely subsist on word of mouth. It's also the best way, in my opinion, to discover something you haven't tried.

7. Remember, nothing is hidden — you just didn't know about it. Calling a restaurant a "hidden gem," a "diamond in the rough" or some other terminology when the establishment has been there for decades just means it was unknown to you until now. Everyone in that particular neighborhood already knew about it, I bet.

8. We're still the Midwest. If a server calls you "honey" or "sweetie," try to resist launching into a feminist rant. It's simply a term of endearment.

These old favorites reflect the cultural mix that defines Detroit.

There's breaded shrimp, the crunchy kind you get at Red Lobster and places like that, and then there's battered shrimp, which is deep-fried jumbo shrimp — real jumbo shrimp — in a softer, seasoned batter. Found at dedicated shrimp joints or as a side order at hole-in-the-wall places, it's a treat with hot sauce, ketchup, or cocktail sauce. You know it's legit when it comes in a red-and-white box covered with waxed paper.

There are two restaurants, both called Asian Corned Beef, that serve up what's essentially a Reuben sandwich — corned beef, cheese, onion, dressing - in egg roll wrappers. They're probably neither the first nor the last to do this, but it's a delicacy beloved by those in the know. 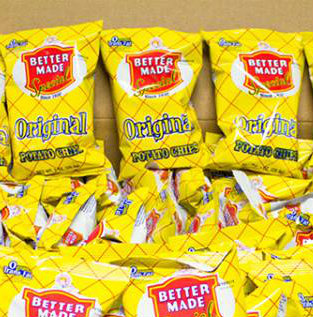 We have our own potato chip factory on the east side of Detroit, and their snacks have been a staple in school lunches, picnics, and vending machines for more than 80 years. Like Faygo, Better Made has flavors you're not going to see all across the country, which makes them all the more unique. A good starting point is to try the plain and barbecue flavors, then work your way to sour cream and onion, sweet barbecue, salt and vinegar, and red hot. The Rainbow chips, a sweet, crispier flavor, are also popular.

BBQ On The Side Of The Road

If you're driving by and see a guy in an apron standing in front of an oil can with lots of delicious-smelling smoke coming out of it, stop immediately and get whatever he's cooking, because it's guaranteed to be the shit. (Though fair warning, we don't really use the term "street food" here.)

New Yorkers have their big, giant slices, Chicagoans have their deep-dish, and Detroiters have their own recipe: cut in squares, sauce on top of the cheese and other toppings, and a crispy crust. Buddy's Pizza is best-known as the purveyor of this style, but other places, like Jet's, Shield's, and Cloverleaf, also have very, very worthy offerings.

Given the city's sizable Latino population, authentic tacos with all kinds of fillings can be found everywhere from fancy sit-down places to corner stores. (Beware that we do not refer to corner stores, party stores, or liquor stores as "bodegas.")

Supposedly named after a chef or some other kitchen employee, though no one can say for sure, at the Hudson's department store, a once-mighty, now-defunct chain headquartered in Detroit that was sold to the company that owns Target and is now owned by the company that owns Macy's. (You may also hear talk of "the old Hudson's building," a downtown behemoth that was famously imploded in 1998 — it's on YouTube.) Hudson's is gone, but the signature Maurice salad — a salad with sweet pickles, swiss cheese, turkey breast, hard-boiled eggs and topped with a tangy dressing— can still be found on menus in some local restaurants. It's easy enough to make at home if you follow a reputable recipe online; be sure to use one that specifically details the Hudson's origin story.

Think of it as a Mexican take on the coney. Born in Southwest Detroit, botana is corn chips topped with chorizo, beans, Muenster cheese, avocados, tomatoes, onions and peppers. It's heavier than a typical plate of nachos, and in Detroit, it's an actual dish — not a side or an appetizer.

The Unofficial Guide to Enjoying Faygo

Faygo is a brand of pop — not soda — that catches a lot of first-timers off-guard. Most flavors are a little sweeter than bigger brands, though not too sugary. And its wide array of flavors can be intimidating. Detroiters consider themselves blessed to have grown up on Faygo, whose factory is located on the east side of Detroit. It's often missed by expats, who regularly lament the shipping cost of a case of the good stuff. Here's a primer on how to get into our favorite pop.

Strawberry-flavored pop. The best one.

Faygo's other citrus flavor, the answer to Squirt. Good stuff.

A vanilla pop. Unlike any other cream sodas out there.

Some like to make floats of it. Drinking it is best.

The answer to the respective Mountain Dew flavors. Blue is a bit sweet for some tastes. You can't ever go wrong with Red.

The lemon-lime flavor, the 7UP/Sprite/Sierra Mist of the family. Best served ice cold.

Ginger Ale is more like Canada Dry, while Gold is more Vernor's. Have to say, the non-Faygo brands are better in each case.

Talk to certain Detroiters, and they'll swear the recipe changed sometime in the ‘90s and that it's not the same as it was back then. Either way, Cola is its own flavor and can't really be compared to Pepsi, Coca-Cola, RC, what have you. Kind of leaves a filmy aftertaste, though. Cherry Cola is a much better execution.

It's one of the top three, maybe even top two, among Faygo flavors. It's a cross between Creme Soda and Cola, which no one else can really pull off. It's also one of Faygo's best mixers, if you like your drinks a little harder.

AKA the Dr Pepper of the family. Dr Pepper is better.

All self-explanatory. Pineapple is a surprisingly good pop flavor. Peach is a Detroit favorite, and a shocker for those who didn't know soda could come in this flavor.

DON'T. An awful flavor for everyone unless you have dietary restrictions. Which, even then, just get water instead.

Developers: East Siders, What Kind of Restaurant Do You Want to See in Your Community?