Welcome to Eat Mile, a new feature series we're unveiling this week as part of our Classics Week coverage. Produced by contributor Serena Maria Daniels, the series explores how Detroit's classic restaurants and newcomers fit into the city's resurgence. 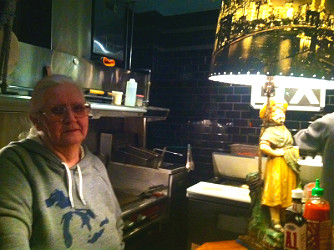 If you find yourself day drinking at Bronx Bar, you've likely been charmed by the watering hole's daytime barmaid, Charleen Dexter, 65, who's been at the Midtown dive for the past 38 years.

Described by her fans as a no-nonsense bartender who pours with a heavy hand, she's both feared by unknowing Wayne Staters and loved by regulars who come for the spot's solid lunch menu. Whatever your feelings about her dry, curmudgeonly wit, Charleen brings that special quality to a joint that has been part of the Detroit lexicon for generations.

In honor of Classics Week, Eater sat down with Charleen to discuss what she makes of all the gentrification afoot in Midtown, The Bronx's place in Detroit's dive bar history, and the classical music that's always playing in the bar.

What was Cass Corridor like when you first started here?

It wasn't too much different than it is now. It was just a neighborhood bar. There were always the Wayne State students, but it was all hookers, pimps, and drugs, Honey, when I first started here, beer was 15-cents a glass, you could get a burger, fries and a Coke for $2.75, and the most expensive shot behind the bar was 65-cents. You could go out with $5, get drunk, and still come home with change.

Now it seems to be more of the suburbanites. It's alright, they spend money, that's what you want in a bar. It just seems like there are so many more bars in the area. You wonder if there are enough people to support all them bars. It's getting better. I don't see it coming totally back in my lifetime, but it'll come back.

I can't walk down the street without someone hollering at me, "Hey, what's up?"...I love the kids. I bullshit with them and half of them call me Ma. I like to mess with them just to aggravate them. I treat the kids like I would treat my kids.

You have children? Do they ever stop into the bar?

Yeah, three. One in Taylor, one in Warren, and one in Belleville. One daughter, she's a blackjack dealer at Motor City, so she stops in every once in a while.

There are quite a few bars popping up that serve $20 craft cocktails. It's not like that here, though. Describe the drinks here.

I mean, we'll make a martini or Manhattan. It's nothing really fancy, but the prices are reasonable. Sometimes I'll get someone who wants to order a fancy cocktail, I tell them, "I'm sorry honey. It's a shot and a beer here." I had a guy come in and ask, "Do you make an Old Fashioned?" I says, "Not for 30 years." He says, "Can you make me a Manhattan?" But not no Old Fashioned. Most of the people who order those types of drinks just want to be show-offs and say, "Oh look, I ordered an Old Fashioned." They don't really want it, but they say, "Hey, we're at Sugar House, we want one of those $20 drinks."

There's quite a bit of tension resulting from new people coming to Detroit. What advice would you give to someone who is new to the city?

What's with all the classical music that always plays in the bar?

The boss tells us to play that because I guess he figures people will get tired of listening to it and put money in the jukebox. It's got a little bit of everything for everybody. I'm not crazy about some of it, but I don't waste my money in it. I do like the country music though, especially Conway and George Jones. They've got them on there.