Share All sharing options for: Pedal-Powered Brewery Hits the Skids as Downtown Property Leads Dry Up

Real estate is hot in downtown Detroit right now, which is a blessing for some area property owners but perhaps a curse for smaller start-ups looking to gain a foothold in the post-bankruptcy Detroit economy. Take for instance, Windmill Pointe Brewing, which announced itself in Fall 2013 but really hit the ground running last November after a front-page article about the green brewing start-up made The Wall Street Journal.

Since then, this pedal-powered brewing venture appears to have hit the brakes as founders and brothers Shawn and Aaron Grose have struggle to secure an appropriate piece of downtown property.

"It's been kind of a roller coaster ride searching from Midtown to Corktown to East Riverfront," says Shawn Grose. "The market has been so exploded and I would say even a little over inflated." 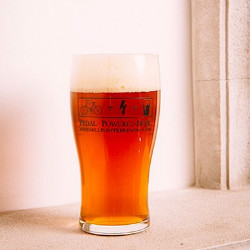 Many places, Shawn says, simply don't offer the kind of foot traffic their concept requires to be successful. "In the places that are affordable in Detroit you're kind of an urban pioneer...You're definitely putting yourself out there."

While the pair has been offered properties as far off as the Upper Peninsula and Texas, the Redford resident explains, they haven't given up on Detroit yet and are actively requesting tips for 5- to 10,000-square-foot spaces in Detroit.

Once opened, Windmill Pointe's green brewing concept will take effect. The brothers expect the facility will house between 10 and 20 stationary bikes that customers will ride as part of the Kilo-Mug Club, generating power for the facility in exchange for energy credits that can be spent on beer. The brewery will use the small energy savings to put money towards additional wind and solar retrofits that will help power the brewing process.

"As we grow we'll add more and more bikes," Shawn adds, noting that, "We've had our calculations blessed by an engineer at the Green Brewing Project. We're working hard to be a part of the growth and the movement in Detroit and bring a sustainable pathway for people who want to participate in sustainable energy, beer, and bikes."

Windmill Pointe's next appearance will be at the North American Bicycle Week at Cobo Center in March.