UPDATED: The Absolute Latest on Detroit's Most Anticipated Fall Openings

Share All sharing options for: UPDATED: The Absolute Latest on Detroit's Most Anticipated Fall Openings

UPDATES: Read through for some new information, including decisions about the fate of the pawn shop sign at Gold Cash Gold, more details about HopCat Detroit's Grand Opening, menu prices at Republic and Parks & Rec, and the latest on the official opening dates for Selden Standard and Top Of The Pontch.

Fall is coming, and while it's way to soon for most Detroiters, for those in the know when it comes to the city's culinary scene, that's pretty exciting news. So many restaurants are supposed to finally open their doors this season, many of them to be run by some of the area's most well-known up and coming chefs. While mum is the word for more than a few anticipated local hotspots, here are the up-to-the-minute updates on six of the places everyone is asking about (in alphabetical order): 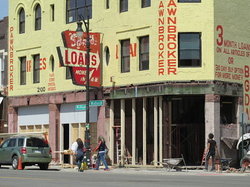 With construction well under way and windows on the front of the building, it is clear that the pawn shop turned restaurant is getting closer to opening every day. Chef Josh Stockton has been showing off his culinary skills in a series of online videos, and he has been testing recipes for their opening menu as well. Eli Boyer, who is assisting the restaurant as they work to open, told Eater Detroit that they are currently looking at late October or early November for the official opening. Most recently they sought public opinion via Facebook about either restoring or keeping their pawn shop sign as is. Consensus seems to be "keep it" though the "fix the neon" crowd had a convincing case as well. Gold Cash Gold. [Photo: Curbed Detroit]

The new beer drinking headquarters of Detroit has been under construction for months, but a new billboard is advertising a November opening, rooftop music, and of course the much-touted 130 beers on tap. They're also awfully excited that construction on the M1 Rail, which will have a stop directly outside of the restaurant, has finally started. As for an official opening date, they have just named November 15th as the day, and will be featuring some pretty intense festivities, including giveaways like a year of free "crack fries" to the first (of age) customers in line, and free fries to everyone all day. Oh, and they'll be tapping a record number of beers from Short's Brewing Co. HopCat Detroit. [Photo: Facebook] 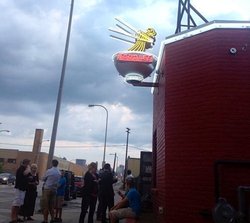 First they put up an amazing neon ramen sign, then they announced a minor setback on Facebook, after necessary equipment had failed to come in on time. However, they have moved forward, informing Eater Detroit that they will be opening on September 12th. Owner Jacques Driscoll said "we will be doing some things before then, but that is when we are going full time." So get ready for some ramen very soon.Johnny Noodle King. [Photo: Photo Courtesy of Nate Bonkowski]

Chef Kate Williams has been garnering lots of positive press for her new restaurant in the GAR building downtown, with a mention on Eater National and an incredibly successful preview dinner last weekend at Revolver in Hamtramck. The menu is set, the construction is well underway, and she told Eater National that this 85-seat "old world European tavern" should be opening this November. Parks & Rec, Williams' smaller restaurant, a diner in the same building, will be opening this October. As for pricing, expect dishes to be in the $7-$30 range for Republic, and $3-$15 range for Parks & Rec, according to a new Crain's article. Check out Facebook for some photographs of Williams' highly polished plates amidst construction and restaurant plans every few days. Republic. [Photo: Chris and Michelle Gerard ]

The long-awaited Midtown restaurant, brainchild of young chef Andy Hollyday and co-owner Evan Hansen still has no official opening date, posting to a Facebook question about opening, "This fall! That answer might make it seem like we're non-committal or vague. But we prefer to think of ourselves as mysterious and enigmatic." However, there are small signs of progress. They just installed a wood-fire oven, which Hollyday will hopefully begin curing in a month or so, and they have an Argentinian grill coming in in that same time frame. As of today (8/28/14) they have officially started hiring, so check their website for open positions and an idea of what exactly they're looking for. Selden Standard. [Photo: Facebook]

With a September 1st 9th opening date just announced,, work is in the final stages, and the menu has been set. Chef Justin Vaiciunas, also of The Jefferson House, is planning two menus. One will be a seasonal menu, changing periodically. The second menu, changing monthly. will be The Chef's Tasting Menu. This menu "will be completely random. It will change in size and concept." Vaiciunas is starting with a Japanese tasting menu, but will go wherever he likes from there. A soft opening is scheduled for September 5th and 7th, and in a new article with the Free Press interior details like an indoor waterfall and reclaimed wood tables are revealed. As for menu prices? Most entrees will be in the $30 range, with some into the $40's. Top of the Pontch. [Photo: Facebook]
· 10 Of Detroit's Most Anticipated Restaurants: Mapped [-ED-]

Everything You Need to Know About Republic and Parks and Rec