This comes as a bit of sad news to longtime Hamtramckans: Campau Tower quietly closed its doors Sunday, putting an end its long run of dishing out sliders, pierogi and other greasy spoon delights to an array of nocturnal clientele. The announcement, that came in the form of a handwritten sign taped to the window that read, simply, "Closing today end of business day," was rather unceremonious. But news of its closure quickly spread on social media, with locals lamenting over the loss of one of the city's last great, late night hangout spots.

"That place, The Clock, and Genie's Wienies were the after bar spots in Hamtramck for a very long time, now they're all gone," Paul Schroeder, a local bartender, told Eater on Sunday. "There was never a shortage of local color at Campau Tower." 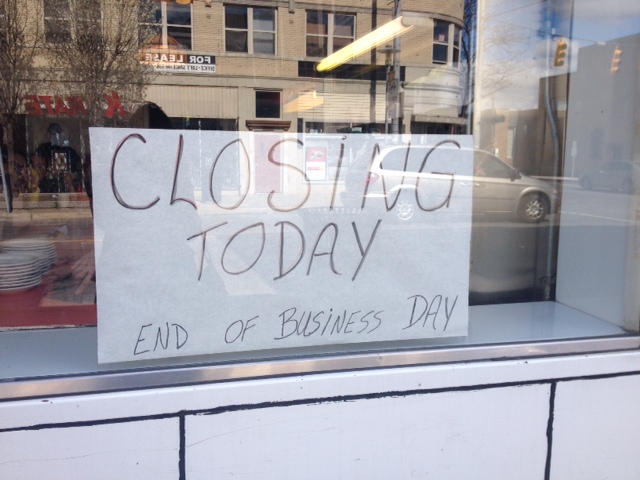 Indeed at any given time, 24 hours a day one could walk into Campau Tower - a spinoff of a spinoff of a spinoff of White Castle - and witness a medley of belligerent, angry drunks, jovial revelers, working stiffs on their way to third shift and down-on-their-luck drifters, just stopping in for a hot cup of joe, all wrapped around the establishment's single counter. The servers/short-order cooks always called their customers Sweetie or Honey, if they didn't already know their names (which often they did).

Recently named by Eater Detroit one of Metro Detroit's most underrated restaurants, Campau Tower is the latest to go in downtown Hamtramck. Earlier this year, citing slow sales, the Wendy's, a few lots away from the tower, left a gap tooth on Joseph Campau. Last year Clock's, another 24-hour joint, was replaced by an L. George's Coney Island Restaurant outlet. And in 2012, the popular Maria's Comida closed its doors to focus on distributing its salsas to local grocery chains.

While some departures have led to excitement in the Hamtramck dining landscape (Maria's former space eventually became the home of the acclaimed Rock City Eatery), the vacancies have others concerned about the future of the downtown district. No word yet on what might go in the tower's place, but one thing's for sure, Hamtramck's nocturnal crowd is now stuck with Checker's, which closes at 4 a.m. -by Serena Maria Daniels
· Meet Detroit's 25 Most Underrated Restaurants [-ED-]