Detroit's culinary scene is developing a taste for internationally inspired, locally sourced, and mobile food options, and there's a new food truck launching this week to fill those very needs. Chefs Thom Ingram and Nate Bonkowski are the founders of The Cook's Crossing, known for pop up dinners at places like Revolver and Grand Trunk Pub, and they're expanding the brand to include their food truck, Pomme de Terre, this week.

It all started with a conversation not long ago, as Dan Gearig (of El Guapo fame) mentioned his food truck fabrication business, Red Beard Customs, to the chefs. He called back "out of the blue" according to Bonkowski just three weeks ago, with a ready to go food truck he thought would be perfect for them. With no food truck experience the plan seemed a little crazy, but they said yes, and have been working non-stop to develop a menu and bring themselves up to speed.

And business is already booming. According to Ingram the truck has already booked such high profile events as the Grand Prix, Mo Pop Festival, Movement, and more. They're hoping to add Eastern Market to the schedule as well, and are ultimately going to provide late nite food to patrons at Two James Distillery, where Bonkowski tends bar. 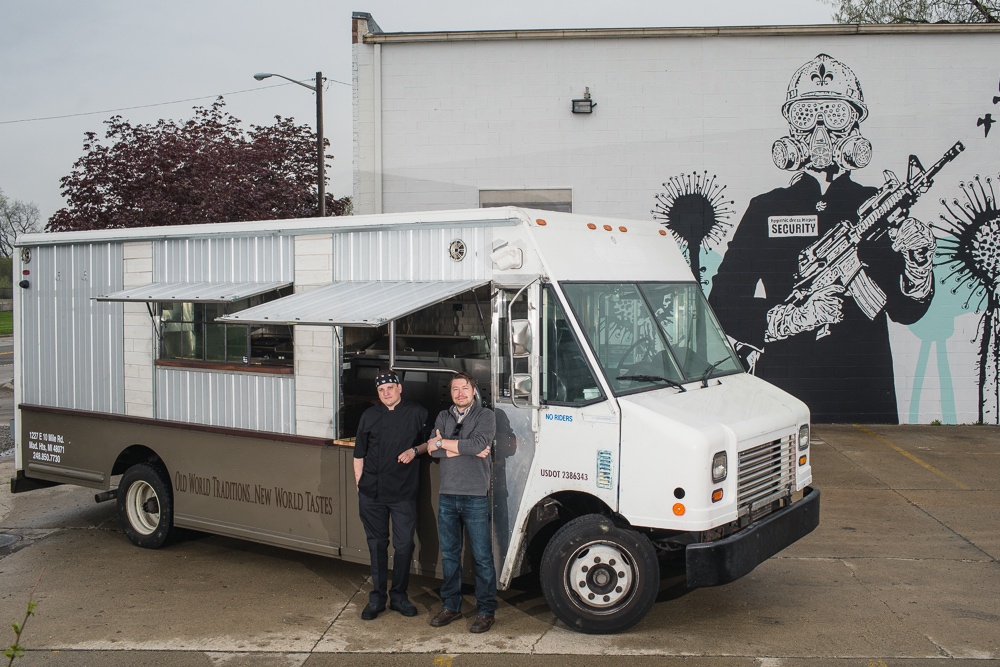 It's a lot for two guys new to the food truck business, but they have the kitchen experience, and the passion, to make it work. The two met years ago, and worked side by side at Woodbridge Pub, with Ingram in the kitchen as head chef and Bonkowski behind the bar as the head bartender. They bonded over their similar culinary perspective and palates, and started cooking together. The small gatherings became popular with friends, who couldn't get enough of the food, and eventually the two formed The Cook's Crossing.

As for the food, they aim to keep things familiar while giving diners the experience of eating something new for the first time. Bonkowski says that unusual internationally inspired flavors done right provide excitement and a real sense of being alive. Pomme de Terre will serve sandwiches with a twist. Think homemade Currywurst, the popular German street dish, but amplified with authentic Indian spices, in addition to their own spin on a classic Coney Island chicken pita, and Vietnamese Banh Mi with their homemade smoked pork. The name of the truck means potato in French, and they aim to feature the vegetable with internationally inspired takes on the popular Spanish dish Patatas Bravas. The traditional version features fried potatoes with a spicy red sauce and garlic mayonnaise, but they're adding Thai bean curry, or short ribs and cheddar, and are even creating a Southwestern version. As for sourcing, the proteins are coming from Eastern Market and they're keeping the focus local for other ingredients as well.

The huge truck, formerly utilized by the Corridor Sausage Company, is what Ingram describes as a full mobile kitchen. They can cook directly on the truck, and do on site catering as well. They're keeping it at Gearig's garage/commissary kitchen, and say his mentoring has been invaluable, as they estimate they've crammed nine months of work into the past three weeks. It's a feat they say would never be possible without the support of Gearig and his wife Lindsey.

Bonkowski and Ingram are thrilled to be taking another step forward as their own bosses. They say that working for themselves allows them to truly do what they want, and they have big plans for multiple restaurant concepts and down the road (all located in their home state of Michigan, of course). Look out for the truck at local events throughout the city in the coming weeks, and keep up to date through The Cook's Crossing Facebook page.
· The Cook's Crossing Official Page [Facebook]
· The Simpsons Dinner at Grand Trunk [-ED-]