A Night To Dismember: A Whole Hog At Slow's Bar-B-Q

Share All sharing options for: A Night To Dismember: A Whole Hog At Slow's Bar-B-Q

A massive orchard-raised pig galvanized two otherwise vastly different Michigan hard cider makers this week during a family-style, eight-course, whole hog dinner at Slow's Bar-B-Q. The roasted pig helped to showcase the unique flavors that each of the brewers, J.K.'s Scrumpy of Alamar Orchards and Virtue, had to offer and gave guests an interesting take on the classic flavor of pork chops and apple sauce.

Guests trickled into Slow's private dining room Wednesday evening, greeted by pours of Scrumpy's pear cider, a sweet blend with a taste reminiscent of what one might find at a traditional Michigan cider mill. Next, came Virtue's Sidra de Nava, a tart, almost briney Spanish-style brew that, alone, might be too much for most American palates, but that worked well to cut the richness of the dinner's first course - a deep red, Huntsman's stew, made with beets, pork stock and chunks of the swine's heart.

Various components of the hog continued making appearances throughout the eight-course meal, including its shoulder in the maple syrup glazed scrapple, its drippings and sausage found in the mustard greens and bits of bacon in the bacon apple jam that guests could spread on sweet potato biscuits. Crowd favorites included a schmaltz butter that went with the biscuits and bacon apple jam, Virtue's Mitten - a blend of last season's cider, aged in bourbon barrels with juice, with hints of vanilla, caramel and charred oak, and Scrumpy's Northern Neighbor, which hints of caramelized apples balanced with sweet notes and dryness. 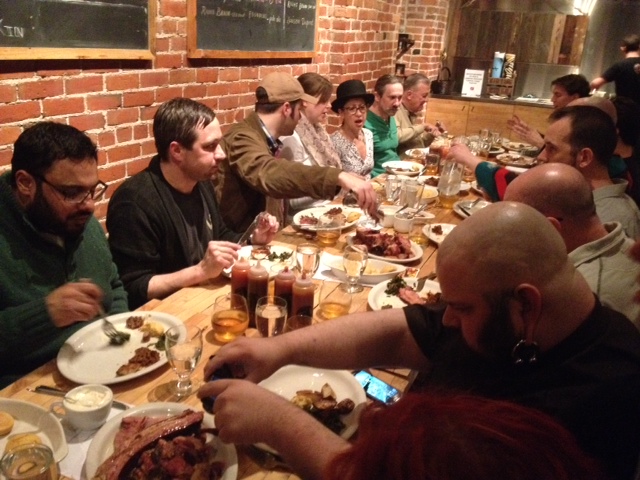 Scrumpy's Bruce Wright broke up the first half of the meal while the hog cooled (it was brined in J.K.'s Scrumpy cider for 20 hours, before it was rubbed with spices and smoked with Scrumpy's applewood for 24 hours and glazed with honey and Slow's North Carolina sauce up until about 20 minutes of being served) with shots of Carriage House brandy from Carolina Distillery of North Carolina, which shares its bourbon barrels with Scrumpy's. In turn Scrumpy's uses them to distill its cider for 18 months. Wright went on to tell the story of the night's main course, which during life helped to rid orchards of a deadly, apple-eating bug, known as plum curculio.

The main course tied together the previous ones, its smoky, aromatic flavor lingering throughout the other entrees. Slow's servers tried to bring out as many pieces of pork possible, including the ribs. Several of the guests shied away from tackling the ribs and instead left them to experts, head chef and owner Michael Metevia and Marc Djozlija (formerly executive chef for MGM Grand's Wolfgang Puck Fine Dining Group) to devour. The meal was topped off with a Dutch apple pie that incorporated pork lardon in the crust and was accompanied by brown butter caramel ice cream. Virtue wrapped up its presentation by raffling off two handcrafted, movie-style promotional posters in which the brewery commissioned local artists to create. 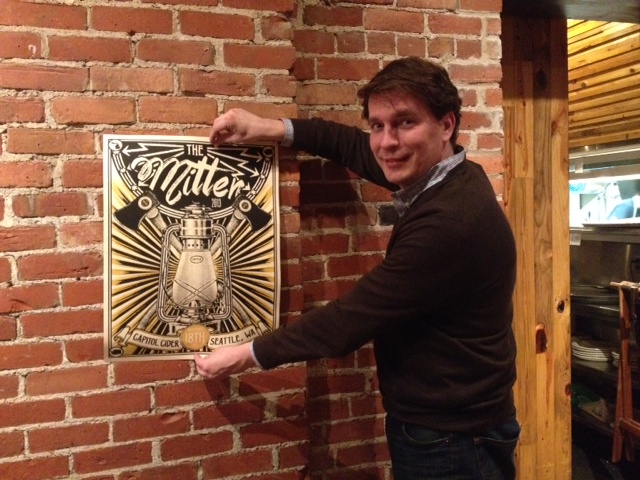 Throughout the meal, the two brewers shared their various labels to highlight what makes each of them standout. They also shared their stories. Both use Michigan apples, but that's about where their similarities end. Scrumpy's of Flushing, has been producing its sweet, American-style hard cider made with heirloom, organic Michigan and Canadian apples for more than a century. The makers of Virtue of Fennville say they draw inspiration from the traditions of Spanish, French and British cider makers, which are far more bitter, acidic and drier than what Americans might be used to. Together, the two brewers offered a balance of sweet Americana and dry, refined sophistication.-By Serena Maria Daniels
· Anything but Average: Timmy's Tacos at the Painted Lady Lounge [-ED-]
· All Slows Bar-B-Q Coverage [-ED-]