Chef Nick Janutol: "I Have Food On My Mind"

Meet Nick Janutol, Chef de Cuisine at renowned Chef Brian Polcyn's Forest Grill in Birmingham. On a daily basis Chef Nick strives to create both dishes and a dining experience he can stand behind. He spoke with Eater Detroit about his drive, his cuisine, impromptu tasting menu lunches, and why good service is so hard to find in Michigan.

Share All sharing options for: Chef Nick Janutol: "I Have Food On My Mind" 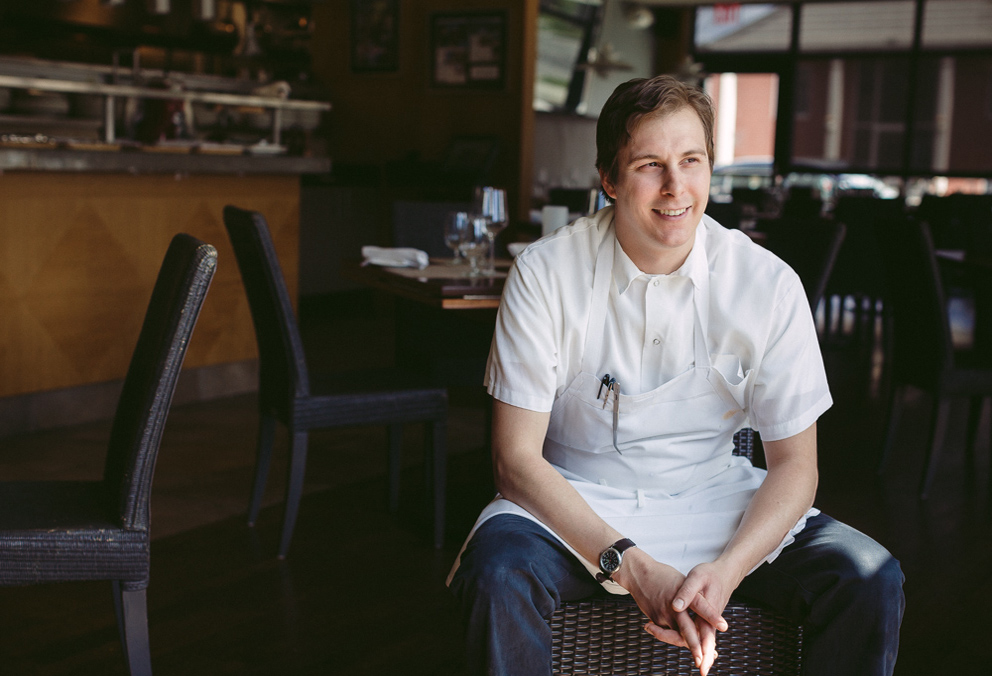 Forest stopped doing lunch two weeks ago, but there are a few tables here having lunch. How did that happen?
The first day we stopped doing lunch the door was open, and I decided to leave it open so that people could walk in and learn we're closed. I felt it's a little more personal than locking them out and forcing them to call and ask why they can't get in. We had a three-top walk in from Chicago on a culinary tour, they had been at Zingerman's and had to drive back to Chicago that night. I said I'd cook for them but they had to eat whatever I made. They loved it. Wednesday nobody came, Thursday a regular came in and a three-top came in and they were okay with eating whatever. I said "Joe (Joseph Salerno, Forest Grill's Sommelier) we should make this a thing." We can do whatever we want and anything we do is a favor, because technically we're closed. We had a two-top who made it a five-top today when they heard about it. I think hospitality is really important and it's a lost art. I think people are more egotistically driven than hospitality driven; I want people to come in and feel like it's a party. I throw mini parties every day. This is my other home, I put a lot of effort in and try to make it taste great and be fun, and sometimes people love it and sometimes they hate it. I just like cooking for people and seeing the smiles on peoples' faces, it's instant gratification. You cook for them and you can tell if you made them happy. That's what drives me.

How long are you going to keep doing these lunches?
Forever. I'm not gonna turn anyone away that wants it, but we're not gonna sit the whole dining room. Four tables, 12:00 p.m.-1:30 p.m. that's it. Everyone feels special that way, Which is crazy because three weeks ago we were doing the same number of tables off of our menu, but now people come in and eat whatever I give them and they're twice as happy.

You had a Springtime in Paris dinner last night. How did that go?
The whole restaurant was filled. People like events. Like Young Guns (Chef Nick participated in the first two dinners). We're gonna do more themed dinners, like two a month. We're still doing the cooking classes, Polcyn's great, he's a very dynamic speaker and can make people laugh. Then we have the Oyster Club every month, we have about 30 people and we teach them how to shuck oysters. This past one there were two gentlemen in their residency, the one came for dinner said it was great food and he was very happy, and he brought his buddy, who is from New Orleans, to the Oyster Club and they were blown away. We get a lot of word of mouth, people say they forgot that we were here. They don't realize we have tons of stuff going on; the Oyster Club alone is cool, and that's just once a month.

Several chefs have recently been talking about problems with providing great service in Michigan. Why do you think restaurant service here isn't as good as it is in places like New York and Chicago?
In New York you get CIA (Culinary Institute of America) kids flooding down, because they want to work in the kitchens, and they realize they're poor and switch to the front of house. But they have a determination to do well, and they work in top restaurants and they enter as runners, and see what someone's doing in the next step, so they keep working. It's why kitchens with brigade systems are better. People are hungry and they work to get to the top. There's more of a flood of talent.

The only way to do that in Michigan is to create a nationally known restaurant that has a competitive front of house. Until we create that system of a good front of house where people fight to work at, we'll never have that level of service. And don't get me wrong, Michigan produces a lot of good cooks, but they're leaving. I've embraced it, but I tell my cooks "work for me for X amount of time and I'll make the phone calls to help you go where you want to be" so they work harder. The more restaurants that open, the better they'll be. You need competition. I fully embrace cooks leaving (to cook in other restaurants). It creates more movement in my kitchen, so I can say "this position is going to open up soon, if the rest of you want it, you better start working harder".

Do you plan to stay in Michigan?
I'm not gonna be held hostage. I want to be in Michigan and create something in Michigan, and I'm gonna do my damnedest to make that happen. But if nothing happens in 10 years I'm not gonna stay. I love Michigan and I love Detroit, but I've got to be happy at work. A lot of people say "oh, Michigan restaurants are fantastic" and sure, some are good, but a lot of them would go under in other cities, and a lot of them that are better would probably be busier. But I don't know, the minute I think I know something about this business I realize I don't know anything. There's always that point of regression in everything you do, no matter if you're a cook or a table maker, they work and do something they love, and then they make another, and it slowly gets worse and further away from the original. I try to make sure I go through everything and see everything they (the kitchen staff) are doing.

How do you stop that regression from happening to yourself?
You have to train yourself. From all the years of fine dining and having a Sous Chef at my throat, I create my own anxiety. Every minute of every day I know someone's gonna mess up, it's just a matter of who. I just have to catch it in time.

What kind of food do you like to make?
My goal is to have everything on the menu be something people are familiar with. I don't want to be using wild licorice root and dehydrated goat heart because that's what they do in Norway. There are people who know their stuff and create a unique experience with that, but other people are like "I found this weed and we can snip off a pine needle and make a pine tea because that's what the hobbits eat". I always try to be straightforward. You get halibut with black olive and orange, and it's good. My only goal is to try and format it in a more modern way. Like our monkfish dish, I wrap it in braised cabbage (served with clams and fish broth)…it's just a chowder, but it doesn't look like that.

There are so many classic Michigan foods that have been reinvented on fine dining menus lately. Do you ever try to do that?
I did create a coney the other day, because I hadn't had one in a year. When I get home I'm usually too exhausted to make anything, so I'll heat up a ballpark hot dog, toast some bread, and if my wife was kind enough to make chili I'll put some of that on there. I'll grab a beer, eat my coneys, and fall asleep on the couch. It's happened more than once. If I'm really lucky I'll have leftovers.

Sounds pretty terrible.
It's more than decent, I do toast the bread! And sometimes I'll even mix up a little chocolate milk. *Laughs* Getting wild!

Forest Grill serves dinner from 5:00 pm. to 11:00 p.m., Monday through Saturday, closed Sundays. Thinking of popping in for Chef Nick's secret lunch? Call before or at least call ahead as seatings are extremely limited.
· Forest Grill [Official Site]
· Forest Grill to Refocus and Serve Dinner Only [-ED-]