Anything but Average: Timmy's Tacos at the Painted Lady Lounge

Share All sharing options for: Anything but Average: Timmy's Tacos at the Painted Lady Lounge

Meet Serena Daniels, Curbed Detroit and Eater Detroit contributor and fan of all things Hamtramck. She has a reporting background and a keen interest in Detroit's past, present and future. She lives in Hamtramck and will be reporting on all things HamTown and much more.

The Painted Lady Lounge. [All Photos: Chris and Michelle Gerard ]

Face it, when it comes to bar food, Detroit-area bars usually stick their guests with a greasy menu of puny wing dings, soggy fries, and an assortment of heartburn-inducing, breaded poppers - all straight from a freezer bag, dumped into a basket and then immersed into a vat of oil.

So for those who can't help but roll their eyes at most pub fare offerings, Timmy Lampinen of Hamtramck offers an alternative. Offered only on Wednesday nights at the Painted Lady Lounge, Lampinen, 38, says these tacos are not just typical greasy bar snacks. Every week, the bartender and seasoned punk rocker who performs in the bands Human Eyes and Timmy's Organism, picks a different meat and vegetarian filling and goes to painstaking lengths to give customers just the right flavor. 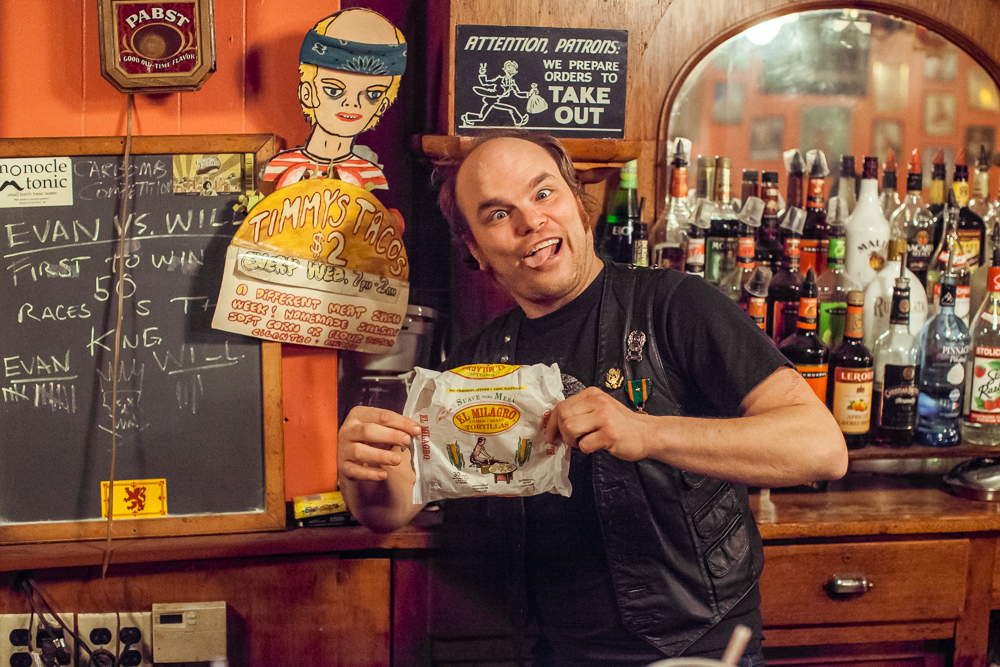 Lampinen says his creations aren't the hard shell tacos mom used to make, the ones filled with prepackaged seasoned taco meat, iceberg lettuce, diced tomatoes and grated cheddar cheese. Instead, he strives for a more authentic, Mexican street taco, by preparing his with handmade corn or flour tortillas and garnishing with a little onion, cilantro and a spritz of lime juice (when limes become available!).

Usually Lampinen sticks with marinated, shredded chicken, or pork, a crowd favorite. But on a recent Tuesday this month when the weather was unusually balmy for this otherwise dismal spring, he decided to splurge by slow roasting an English cut beef chuck roast on a charcoal flame grill. He slowly simmered the beef for three hours with roasted tomato, green chilies and grilled onions that resulted in a tender shredded meat filling, infused with smoky flavor from the grill. For the finishing touch he made a fiery, slightly sweet homemade salsa made with Cubanelle peppers to pair with the chuck. 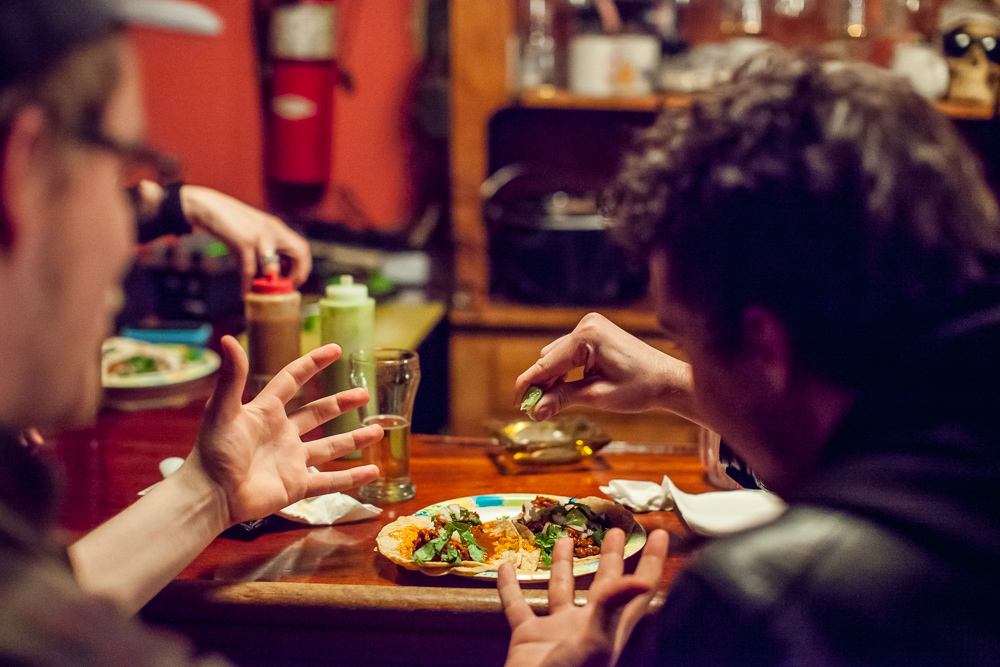 Lampinen's salsas aren't the watery, canned type with chunks of tomato and little heat. He says his salsa-making is inspired by his upbringing, when his parents took he and his brother out to eat at taquerias in southwest Detroit. He prepares each of his three to four styles of salsa by selecting fresh ingredients, either at Honey Bee Market in Mexicantown or Hamtramck's Al-Haramain market, both Meccas for quality produce and spices. Lampinen says he likes his sauce spicy and does not skimp on the hottest peppers he can find. He opts for smoked ghost peppers, poblano chilies and Anaheim peppers and one of his newer salsa varieties featured 77 scorching Thai chili peppers.

Another staple of Lampinen's menu are vegan charro beans. They're similar to the legumes found at Mexicantown establishments, minus the shreds of bacon, of course. Here, Lampinen soaks eight pounds of dry whole pinto beans overnight. He simmers them in vegetable stock, onions, poblanos, garlic and Mexican beer, usually Cerveza Pacifico Clara. To get that smoky, bacon-like character, he throws in chipotle peppers. 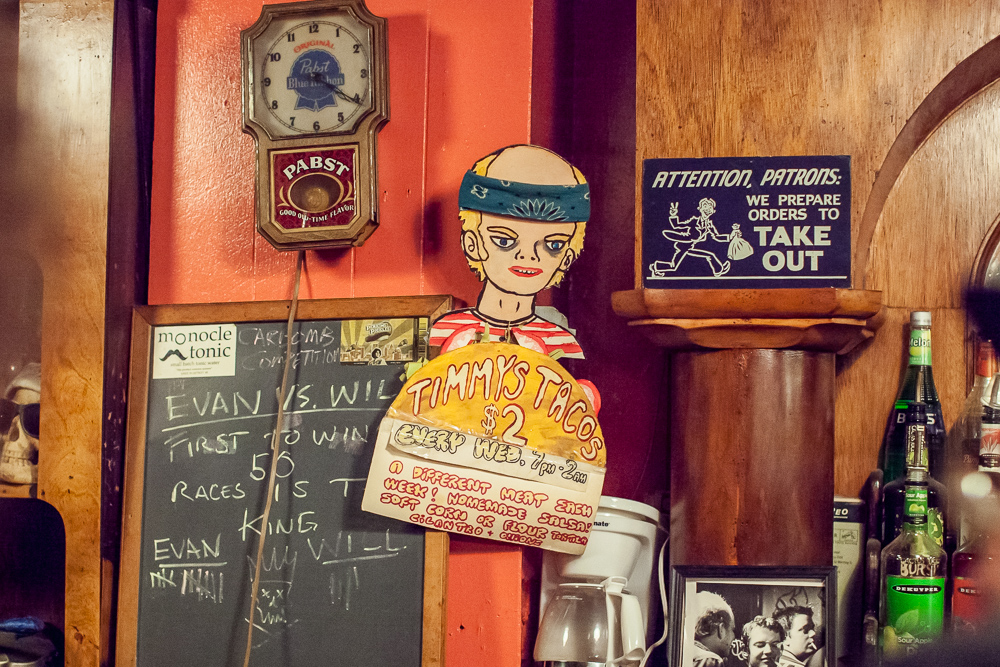 Keep in mind that Lampinen, a celebrated Detroit-area musician who in 2010 won a coveted Kresge fellowship in performing arts, does this all on his own. So don't expect neat, little to-go boxes. No, he usually covers takeout orders with a paper plate and suggests getting tacos with flour tortillas - they hold together longer. And arrive early. Timmy's Tacos are served between 7:00 p.m. and 1:00 a.m. or until they're gone. Lampinen makes enough meat and beans (or other veggie-friendly filling) to fill two slow cookers (to keep the food warm, Painted Lady does not have a kitchen), which equals about 120-150 tacos. As the nights start to heat up, expect these handheld culinary treats to run out early. -By Serena Maria Daniels
· 5 of Mexicantown's Best Restaurants [-ED-]
· All Hamtramck Coverage [-ED-]