Chef Luciano DelSignore On Pizza, Passion, And Why He Loves Thin Crust

Share All sharing options for: Chef Luciano DelSignore On Pizza, Passion, And Why He Loves Thin Crust

Chef Luciano DelSignore is our Pizza Week Lifer interview, as he has been making pizzas since childhood. Chef Luciano is not typically regarded as a pizza chef; he is most well known for his fine Italian restaurant Bacco, but he also owns Bigalora Wood Fired Cucina, with locations in Royal Oak, Southfield, and Ann Arbor, and he has enormous appreciation for a good pie. Bigalora (formerly Pizzeria Biga) is known for traditional thin crust pizza, made without chemical leaveners. They instead use Biga, a natural yeast starter, which makes their crust so distinctive in the region. Eater spoke to Chef Luciano about his experience, his passion, his pizza preferences, and a few of his pizza making secrets. 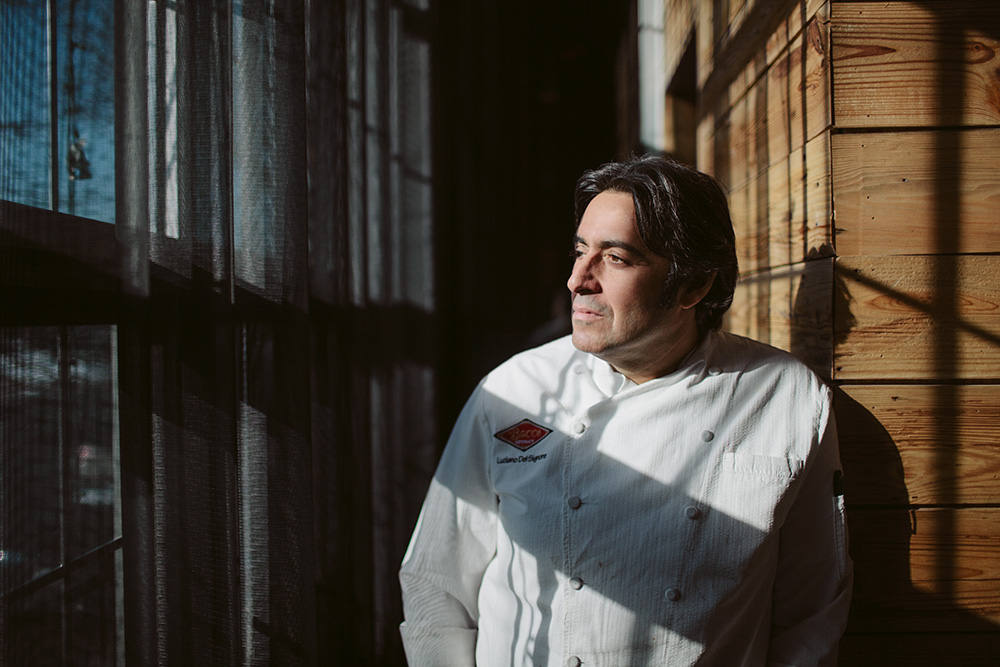 Do you remember the first pizza you ever made?
The actual very first I don't remember, but I was probably making pizzas as early as 8. My dad had a pizzeria and a pizzeria diner, my parents were Italian immigrants, and I was 8 when he had a place in Livonia, called The Italian Hut on Plymouth Road. I was baking pizzas very early on.

What made you decide to be a pizza chef?
Pizza for me is relatively new, I'm a fine dining chef, but I decided to get into the pizza business because I couldn't find a great pizza. I developed Biga under that premise; I wanted to create the best tasting pizza, and I accidentally found that it was something really healthy that is light and easy to digest.

What's the secret to a great pizza?
The crust is key. Number two are the tomatoes, you have to get great tomatoes, but it's easier to find tomatoes that can be sourced. But the dough is the labor and the passion, and the dough is the base. Without a good foundation it doesn't matter what's above it.

What's the strangest topping you've ever tried to put on your own pizza?
Probably nothing too strange, I'm a real traditionalist, I have this ability to think through it, I can taste it by thinking of it just in my head. Pizza shouldn't have truffles and caviar, it should be grounded. Here at the restaurant we fry crispy shishito peppers, and use east coast manila clams, and charcuterie like duck prosciutto.

Besides your own restaurants, where do you like to go for pizza?
I like Supino's downtown; I like Dave [Mancini, the owner]. Abroad I always seek out the best Neapolitan pizza, it could be two or three places in one trip. I developed Biga to satisfy my own craving, it was a selfish restaurant!

The typical Detroit style pizza is a deep dish, why did you decide to focus on thin crust?
I think it goes back to being a traditionalist. I wanted to go back and create the finest Italian pizza that could be had. It's easier to cook the dough through too. I cook for myself. I've never molded my restaurant because it's what the market called for, but if you like how I eat you'll like it.

What are your preferred pizza toppings for a night at home?
I love charcuterie because I make charcuterie. I love wood roasting vegetables, I have that oven [a large brick pizza oven used at Bigalora] at my house. First you have to give some love to the vegetables, and choose whatever is in season. I love roasting vegetables with olive oil and salt and letting them cool and then putting it on a pizza. It's phenomenal. I also like wood roasting garden tomatoes in the summer and making sauce out of them.

What's your preferred beverage to accompany a pizza?
You know if you would have asked me this question 5 years ago I would have said lighter red wines, but I have grown really fond of the Michigan craft beer movement, which is why we put them in our restaurants, and I think when it's right it's light and fresh.

So all said and done, for how long have you been making pizzas?
I was making pizza from a kid until around age 20, and then I turned the family restaurant into fine dining, and didn't start again until I opened Biga In 2010. It hasn't been steady, but I'd periodically make pizzas at my house. You have to plan a week in advance, it's such a long process if you start from the beginning, with the Biga [yeast starter], it takes 6 days to make dough, and I wanted it all the time, so I'm back in the pizza business!
· Bigalora Wood Fired Cucina [Official Site]
· All Pizza Week 2014 Coverage [-ED-]