Noticing small chocolate cakes on café counter tops and French menus with the label "Chez Chloé" lately? Meet Chloé Sabatier, the 23-year old Parisian who in less than six months has built her grandmother's recipe for chocolate lava cakes into a successful business in Detroit, Metro-Detroit, and beyond. Chez Chloé makes lava cakes in a variety of flavors, and local businesses are taking notice, adding her desserts to their menus and pastry selections all over the city, and she isn't stopping there.

Chez Chloé started as a small stand in Eastern Market, but her cakes are already available at Always Brewing Detroit, Great Lakes Coffee, and French creperie Le Petit Zinc. She also just started selling through Door To Door Organics, so customers throughout the state can have their chocolate fix delivered straight to their doors. Caterers and event planners are also eager for the French chocolate desserts, and Chloé says that all of the demand is necessitating some changes.

She will soon have her own delivery truck to facilitate drop-offs throughout the city, and in the next month or so she'll be looking to hire a baker to help with production. However, one thing she never wants to change is her dedication to quality and local ingredients. She sources the chocolate from Belgium, and gets her other ingredients from Eastern Market. That local mindset and dedication to supporting other small businesses is very French, but it works well in Detroit, and Chloé is thriving because of it: "Detroit is a village, everybody knows each other, so it's easier to start a business here than in New York, because everybody needs something new and there's a lot of vacant space". 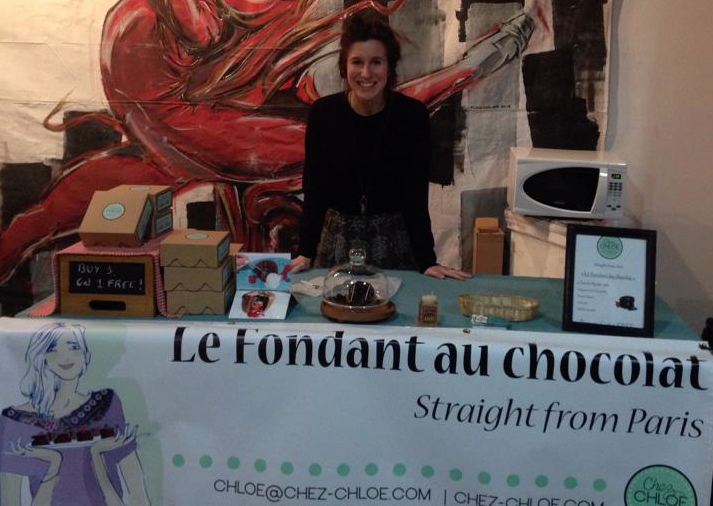 As for expanding into other desserts? That won't be happening, as she explains that there's something special about them that other small desserts like cookies or cupcakes just don't have: a process. Chloé explained that to eat the molten cakes, which are perfectly sized for two people (or one, let's be honest) you need to warm them, use a dish and a spoon, and sit down and enjoy it. It's an experience, it's a real dessert that takes time, and that's exactly what she believes makes them feel so decadent.

But those looking for variety won't be disappointed, in addition to chocolate with a chocolate center she also features salted caramel, peanut butter, coconut, and for Valentine's Day chocolate cakes filled with raspberry puree and topped with pistachios. She says most of her customers come back and repeat the same orders, and she is proud that Detroiters are so eager to support her goal of sharing real French pastries.
[All Photos Courtesy Chloé Sabatier]
· Chez Chloé Lava Cakes Official Page [Facebook]
· All Chez Chloé Coverage [-ED-]