It's finally here: the Comerica Hatch Detroit HatchOff, also known as that time when the actual business prowess and planning prospects of the top four finalists in the 2013 contest are judged by actual business owners and not just the general public.

Each competitor will have their chance to talk about why their plan is the best to a pannel of judges in the M@dison Buildling's Madison Theatre. The final winner of the contest's $50,000 will be determined using the popular vote and the HatchOff judge votes in equal weight.

The final four competitors are Batch Brewing Company, Corktown Cinema, Spielhaus Toys and HenriettaHaus Coffee Roasters. We're live at the HatchOff, bringing you updates as the contest winds down to the big finale.

6:06 — We're live here at the M@dison Building in downtown Detroit. There's apparently a mix-and-mingle cocktail hour before the HatchOff gets started, so the pitching and campaigning won't get started until 6:45. Food and drinks now (and later) are provided by previous Hatch Detroit winners La Feria, and earlier Hatch Detroit semi-finalists and finalists, Alley Wine and Rock City Pies. Just because you don't win Hatch, doesn't mean you can't move forward on your idea. La Feria is set to open this fall, and Alley Wine and Rock City have similar opening plans for later in the season. 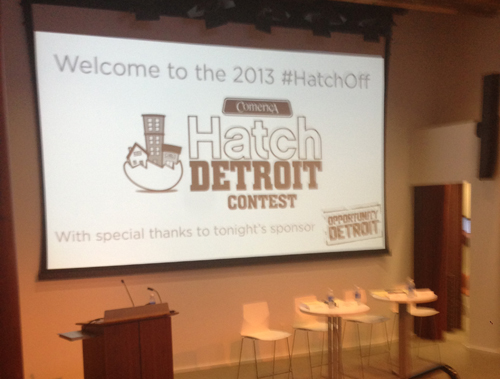 6:45 — Inside the M@dison Theatre, it's quiet. But it will be soon be full of ideas. The four finalists are mixing and mingling and putting the final touches on their pitches. One member of each pitch team will present their plan to a panel of judges. The winner will be chosen after a deliberation by the judges, combining both the judges' decision and the public vote up until today. We, the present public, also have voting slips. It is unclear if those slips will be included, since much of the crowd here is made up of family and friends of the contestants. 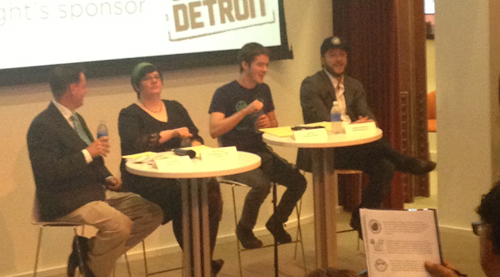 7:00— The contestants are seated, the audience is ready, and so are we. Mildly wild applause when the host invites the audience to clap for itself for being "committed" to the city of Detroit.

7:05 — Applause for main Hatch Detroit sponsor, Comerica Bank and HatchOff host, Opportunity Detroit. "Our Top Ten semifinalists put up a hell of a fight — we had over 26,000 votes in the first round," says Hatch Detroit cofounder, Ted Balowski. There are many Hatch 'alumni' in the audience, which is a fun way to describe the folks who played the game in years past.

7:10 — Hatch co-founder Nick Gorga holds up the beer-stained bar napkin that served as the creative foundation of the contest three years ago. They've held true to their maxims, he says — Engage the Public; Fund One Launch Many; Grass Roots Connect Businesses. "By the end of this year, there will be at least 10 of the 20 2011 and 2012 Hatch Detroit semifinalists who have opened their own storefronts right here in the city of Detroit," Gorga says.

7:18 — Brandon Wally of Corktown Cinema is up. He presents a mind blowing map that shows the difference between new and old cinema landscape in the city. From dozens and dozens all around the city to five today, he says. "Think about it: when Detroiters go the cinema, they have to go outside the city," Wally says. "Dinner and movie is a classic American date — we'll keep locals here when they want to go the movies. Spending their money in Detroit, having fun in Detroit."

7:20 — Batch Brewing is up. The pitch is that Detroit is incredibly underserved for local breweries. In a city of nearly 700,000, the city has the same number of breweries as nearby Royal Oak, with only 57,000 residents. "Breweries are a place where communities come together," Batch partner Stephen Roginson says. He brings up the popular Feel-Good Tap (beer for charities) and pitches a 'brewery incubator' program to create other new breweries in the city. "Beer makes us happy," Roginson says. "More beer makes us more happy."

7:23 — Amy Duncan of HenriettaHaus Coffee Roasters has a more polished presentation than her predecessors. She tells the story of how she started a public records research company at age 24. The successful company, however, was not her passion — that's what coffee is for. "The moments that we share around the cup are what matter," Duncan says. She's been at Ferndale's Rust Belt Market for two and a half years, where her brand has been built up every weekend, she says. "I am hoping to be able to get my doors open to the community sooner rather than later," which is where the $50,000 comes in.

7:26 — Spielhaus Toys is here (which, while not necessarily about food, is still here so we'll cover them). They make the valid point that the catch phrase 'Live Work and Play' in Detroit forgets that Detroit has no valid shopping district. Opening the toy shop will help parents and their kids play in the city, the founder says. "The toy store experience is about more than toys."

7:30 — Judges are asking questions. "What was a time you had to get through a difficult challenge, and how did you get through it?" Gutierrez asks. Corktown Cinemas, in their iteration as Burton Theatre, had to convince a reluctant distributor to play a blaxploitation film. Spielhaus Toys had problems with volunteer work and enrollment at his daughters' Friends School of Detroit. Batch Brewing learned in process that the small hurdles of opening a small business are more complicated than originally expected, but collaboration is key. HenriettaHaus, self-employed for 12 years, learned how to get through times without client work by driving forward with whatever small pieces of work they could calmly scrounge up.

7:35 — Hall cautions about the amount of capital involved in opening a small business. "What do you do if you run out of money in your first year?" HenriettaHaus says they have a small-growth strategy, with small steps forward and brand expansion along the way. With every advance, money is set aside to move through the next few years. Spielhaus jokes his wife's job is a financial cushion, as well as a process of placing large and deliberate savings to the side. Batch Brewing has overestimated their business plan by 15 percent from the beginning to build in a financial cushion in the future. Corktown Cinema understands the general cost of operation from the days of the Burton Theatre, but additional backers behind the plan could step in should the need arise.

7:40 — Posch wonders about the planned locations for each company. "How will you appeal to people who aren't getting to you on their lunch hour or walking by?" Batch Brewing is excited to be in Corktown, home of the city's hottest business boomlet, and their location hopes to capitalize on destination traffic for downtown sports games. They are also aiming to be a neighborhood brewery, and their buildout has led them to create a good deal of buzz in the area as they develop. The promise of beer tourism — which is a thing, apparently — also helps. Spielhaus is looking at downtown near Library Street. The downtown YMCA requires on-street or parking garage parking, the Skillman Branch of the Library and the Puppet Art Theatre all are family friendly locations, meaning that family groups are a huge boost to their business plan. Corktown Cinema established a clientele of suburbanites and locals in their old Midtown location, and Corktown is a much more walkable and approachable location than their old branch. HenriettaHaus praises the high density of their Hamtramck home, and walkability of their coffee shop location. Additionally, the Rust Belt market's customers have begged for a mid-week coffee opportunity, creating a base for the future.

7:45 — Solaka wonders if the contestants have plans to sell their wares outside of their storefront. Spielhaus Toys hopes to sell toys online in a curatorial sense for customers around the region who want to buy local and also online. HenriettaHaus already has online sales for their roasted beans around the country, and cafes contact her regularly for use of the beans as they open. Once they settle in their own storefront, future cafe sales are a possibility. Corktown Cinema can't necessarily sell their wares outside of the future theatre, since they aren't Netflix. Their social hub atmosphere will create a core clientele, and provide the opportunity for future scaleable growth. Batch Brewing Company hopes to expand their barrel capacity in the next two to three years to as much as 25,000 barrels. Their projections are based on a small number of barrels, and the future provides the opportunity to expand their brand to distribute to other bars and grocery stores after the brewery is set and open.

7:52 — Solaka asks Batch Brewing what they need the $50,000 grant for, since they are already along the way toward being built out. "Getting loans for start up business is incredibly daunting," Roginson says. The grant is meant to purchase equipment for use as collateral for future loan applications.

7:54 — Another question for Batch — where are they getting their equipment? A lot of it is from Michigan, though not all, and the overall cost for their needed equipment is roughly $70,000. Other contestants answer the "What is the grant for?" question. Corktown Cinema already owns most of the equipment, the grant would build out their space. HenriettaHaus, too, has most of their equipment, and their itemized list of future needs comes to roughly $47,000. Spielhaus estimates they need $100,000 to open, with $50,000 devoted to retail inventory.

7:56 — Posch warns that locating in the Library Street neighborhood creates the problem of event traffic — football games, parades, etc. Spielhaus hopes to drive traffic from events into the store, and set up a parking validation system with nearby parking garages.

7:58 — Hall says the common belief that Detroit is a "young, hip, Millennial" city, but that demographics don't quite play out that way. What are the finalists' visions of their clientele? Spielhaus says that the downtown business crowd is huge, and varied. HenriettaHaus notes that coffee is the second most commonly traded commodity after oil. Everybody drinks coffee, or tea, or juice — they'll have all three, plus beer. Corktown Cinema says the movie audience is huge and hungry for their films. Batch Brewing says the craft beer drinking crowd is bigger and more diverse than anyone thinks — 50 / 50 men and women, a wide variety of ethnic diversity, etc.

8:00 — The final appeal. Spielhaus Toys — "Adults are not the only ones who play in Detroit. Kids play in Detroit, too." HenriettaHaus Coffee Roasters — "I love what I do." Corktown Cinema — "I think we can serve the people of the city of Detroit by keeping them in the city for movies." Batch Brewing Company — "Batch Brewing Company is all about community. We're altruistic capitalists. We're going to make money, but we're doing much more than that."

8:02 — There's a bit of a pause here. The audience can vote while the judges deliberate, and there's a short pause until the final winner is announced at 8:45. Follow us @EaterDetroit, check back on the site later and tune in tomorrow for more from the finalists and winner of the 2013 Comerica Hatch Detroit Contest.

8:45 The winner of the 2013 Comerica Hatch Detroit Contest is Batch Brewing Company. Batch previously disclosed that they are roughly $70K from opening. With this grant, they, like many of the contestants, are merely one step closer to opening. For the Batch crew, that step is sweetened by a $50,000 grant.

All the Recent Southeast Michigan Restaurant Openings to Know